Cleek Schrey (USA) at WhiteBox Tuesday 13
The composer and fiddler will present new work for vibrating strings and playback, including new field recordings from an ongoing project in Kentucky

Lee Gilboa (Israel, based in Providence RI) at WhiteBox Wednesday 14
Will present two multichannel fixed media compositions centered around the speaking voice, the first piece – Through The Halls, was created in collaboration with, and features vocalist Chanan Ben Simone, the second piece – Halves of a Story, features a speaking chorus and the rapper SAMMUS leegilboa.org

Gryphon Rue (New York City) at WhiteBox Friday 16
His music is constructed of complex patterns derived from instruments such as bowed hand saws, harmonium, and custom synthesizers, the music discloses a fascination with mimetic potential—the ability to suggest biological actions, molecular events, possession, nourishment—and is above all, made with people’s pleasure in mind; joined by Will Epstein on piano, synthesizer, and soprano saxophone gryphonrue.bandcamp.com/album/a-spirit-appears-to-a-pair-of-lovers
gryphonrue.com/ Instagram: 4n_objx

Frédéric Acquaviva and Loré Lixenberg (London) at Fridman Gallery Monday 19
His “ANTIPODES” (69′), for live mezzo (Loré Lixenberg), dead electronics, video and the recorded voices of the artists Joël Hubaut and Dorothy Iannone, was composed in 2019 at EMS, Stockholm, described by Olaf Nicolaï as “a provocative sign against the background of today’s listening environment”, “ANTIPODES” was awarded the prestigious Karl Sczuka Prize in 2020 and was premiered at Donaueschingen Festival in 2021 frederic-acquaviva.net lorelixenberg.art

Events in October and November and December 2022

September 21-24, the festival – shut up and listen!, produced by Bernhard Gal, at echoraum, Vienna, Austria, a presentation of Working Touch by Phill Niblock, four hours of Film as Video with Music, presented on a large Video Monitor with headphones during the whole festival, as well as a live event during the festival And many other artists

October 2, a reception at White Box Gallery, 9 Ave B, NY, to celebrate PNs 89th Birthday and the release of a new Touch project of Phill Niblock – Working Touch, a USB stick in a CD sized Digipack, with 4 hours of video with four hours of music made from 2013 to 2016, files of video with music and of CD quality music. An evening organized by Katherine Liberovskaya and WhiteBox

An unforgettable immersive experience, Inside your ears showcases the siren organ with its rich and powerful vibrations and tones! Jean-François Laporte’s emblematic instrument composed of six truck sirens will be augmented for the occasion.

An intrepid explorer of sound in all its originality and physicality, Totem Contemporain presents three works by Benjamin Thigpen, Phill Niblock, and Jean-François Laporte, respectively two world premieres and a Canadian premiere. Alone on stage, seated in the middle of the horns facing the audience, Jean-François Laporte modifies the volume, attack, and timbre of the sounds produced, in an entirely acoustic manner. The siren organ has a brilliance and presence that makes the body vibrate, reminiscent of the ship’s horns in harbour symphonies.

levivier.ca/en/concert/2022-23-season/inside-your-ears
PN not resent but on Zoom

October 10-25 2022 – Cyfest-14: Yerevan, Armenia, on the 18th, a set by Katherine Liberovskaya & Anoush Moazzeni of Video and Music, a set with the Music and Films/Video by Phill Niblock

November 2 – 28, a residency for PN & KL at the Emily Harvey Foundation, Venice Italy

Please join us for our next Hyphen Hub Salon to celebrate the life and legacy of the acclaimed British experimental composer, turntablist, and multimedia artist, Philip Jeck who died last month in Liverpool. The evening will feature special guest performances by artists who worked and collaborated with him.

Featuring: Marina Rosenfeld, Phill Niblock, Ted Riederer, & Zachary Paul who will each pay tribute in their own unique way.

Presented by: Hyphen Hub in partnership with Touch

RSVP to get location: asher@hyphenhub.com

HOT OFF THE PRESS

In NY and Vienna, simultaneously. with Mia live in Vienna and Katherine live in NY
And Phill shily pre-recorded

PhonoFemme sees itself as a platform for experimental music and sound art by women in Vienna. As a series of performances from October 1-3, 2021, the aim is to network the diverse international scene of female artists and to bring them into a communicative and aesthetic exchange. In cooperation with Experimental Intermedia New York, join us on October 1 at 1 PM EST / 7 PM CET for virtual streaming of Phonofemme Vienna and Experimental Intermedia New York with musicians Mia Zabelka, Phill Niblock, Katherine Liberovskaya and Daniel Neumann.

Here is an event that is live in Vienna, if you happen to be there – except for us, we are in NY and Barcelona, and we are live at the time it’s happening

Tune in  – And thanks to our friends at klingt.org

A live video and sound set, streamed from Experimental Intermedia NYC and from Barcelona

All three of us for one set, with live visuals by Liberovskaya, and live flute and electronics by Held, and sound collage pieces by Niblock

And then Niblock Solo:
video screening: “The Movement of People Working”  – Phill Niblock

due to limited admission please reserve via email to: bloedetickets@klingt.org

This is an announcement about 4 online music events on June 19, 20 and 21
The letter is from Oda.co, the producer of these music events, and they feature Phill Niblock and Katherine Liberovskaya, and this is a test event of their website and eventual series of webcasts

On Saturday afternoon, the event will be a virtual premier of a new music piece by Phill, finished the day before, of course, named Poom, with Stephen O’Malley playing e-bowed guitar, from sound material recorded in the Trace Elements studio of Robert Poss, 28 minutes long

Note that the Saturday afternoon event is at 3pm NY time, and 9pm European time

Today we would like to invite you to spend the weekend with us and the artists Phill Niblock & Katherine Liberovskaya.

Regardless of what you know about the work of Phill and Katherine, speaking to someone like Perry is always interesting. Perry is a sound artist and the creator of the Oda speakers, which you will hear more about later this summer. Perry says: “Phill Niblock is often labelled a minimalist. This amounts to a dismissal. I would say monumentalist, because the sound is so thoroughly consuming, and commanding of attention. As when a tree falls in a forest, if you’re not giving this music your full attention does it even exist?”

Phill and Katherine have been collaborating together since the early 2000’s. In the past week, Perry has been working with them almost daily with sound-checks in advance of this weekend’s shows.

“You know, Katherine Liberovskaya is well known as a video artist, often collaborating with musicians to provide a visual element with musical qualities”, Perry says. “What I think is really interesting is, on this occasion, she is a musician. In this context she performs sound with visual qualities. It is hard not to conjure an image of how each sound is created.” He ends, “I so look forward to hearing this with Oda, which engages the room it is in so differently than any other speakers!”

Here is this weekend’s schedule:

To listen, please visit live.oda.co at the performance times listed above. If you leave your browser open, the broadcast will begin automatically as they start.

IN SOLIDARITY Streams from the EI site, indefinitely…

June 7, 2020 » Permalink: IN SOLIDARITY Streams from the EI site, indefinitely…

To view, direct from Vimeo

Club 89 draws inspiration from the historic Crazy Dragon, which operated in the 90s in the Hotel Forum, one of the most luxurious hotels in Kraków . Named 89 – referencing the end of communism in Poland, and the year the club was built. The interiors have not been changed. The red velvet just like in “Twin Peaks Town” by David Lynch still dominates here. This place with an amazing atmosphere will host equally amazing musicians and artists on this year’s edition of Unsound Festival

October from 19 till 24, in Singapore with Carlos Casas, NTU Centre for Contemporary Art Singapore,  NTU CCA Singapore is a national research centre of the Nanyang Technological University

Nov 4,5,6 – Gaida Musica Festival, Vilnius Lithuania; on the 4th, #9.7 (Number Nine point Seven) for Orchestra and Solo Cello (2017, 30 min) with Juho Laitinen, cello, and  Klaipeda Chamber Orchestra; on the 6th, a concert with Film and Music by Phill Niblock

December 21, the Winter Solstice at Roulette, in Brooklyn, 6 hours of Phill Niblock films and music, Roulette.org 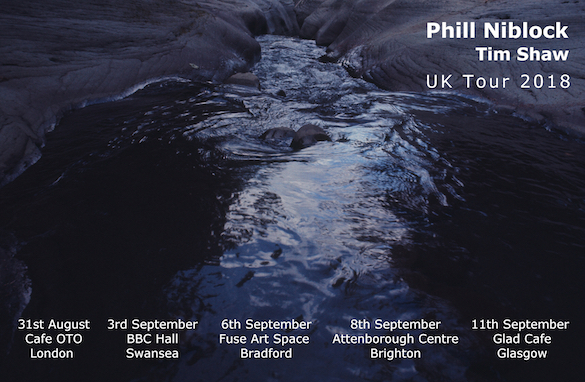 May 14, a talk by Phill Niblock and Thomas Ankersmit at Rytmisk Musikkonservatorium in Copenhagen https://rmc.dk/en

June 20 and 22 – Vienna at MUMOK Museum, films and music, with Martin Zrost playing live (the 22)

A book fair at the Tate Modern, with a section by Frederic Acquaviva, of “La Plaque Tournante” in Berlin, laplaquetournante.org/ with a new book of “Cello Pieces” scores, by Phill Niblock

The premiere of “Surge”, Phill Niblock’s first piece for analogue synthesizer, performed by Thomas Ankersmit at MaerzMusik in Berlin this weekend, and the first collaboration of Florence To and myself, also in Berlin, at KW.

The Phill Niblock concert runs all night long, from Saturday around midnight until Sunday morning, and is part of MaerzMusik’s “The Long Now” event at Kraftwerk Berlin.

77 min The Movement Of People Working

Phill will be present, as well as Brian Brandt from mode records. Come and enjoy this unique screening in an old style movie theatre from 1963 with a new 5.1 sound system.

more in German only at http://l.facebook.com/l/TAQFo9z4cAQGTtZG3x1kcm-TX1TlSFzqm3EfCCBBwxl0rOw/www.gerngesehen.de
https://www.facebook.com/events/342310115958385/

More about the Music on Brazil 84:

Three Petals is originally conceived to be performed by three ensembles plus pre-recorded playback. The first performance (by the commissioners – Klub Katarakt Festival in Hamburg) will take place in separate but contiguous halls. The audience can only hear the complete work by walking through the spaces. The piece could also be performed by three separated ensembles in one common space (e.g., a concert hall). The first and third ensemble move up a semitone through the piece (one from F to F#, the other from C to C#), while the second ensemble remains « stationary » around A. This, theoretically, results in a move, over 24 minutes, from major to minor, albeit blurred by the microtonal character of the totality.
D i e Ö f f n u n g d e s R a u m s
Kampnagel Hamburg

Jan 27 – A set in a concert at Club Transmediale, Hebbel Theater 2, Berlin
Featuring a new performance and recording of the orchestra piece – “Baobab” by the Zinc and CopperWorks brass quartet, plus a performance of “Vlada” for viola d’amore, with Elisabeth Smalt; AshEli, with Eli Keszler, percussion
Jan 30 – Thursday – A concert by Phill Niblock and Thomas Ankersmit – at KörberForum,
produced by Elbe Philharmonie, Hamburg, Germany

Feb 5, Wednesday – A concert at the Logos Foundation in Gent Belgium, playing a piece realized for the Logos Robot Orchestra, “One Blue Rose”, Vlada BC, with Elisabeth Smalt, viola d’amore; and others

Feb 24 – 28, a series of lectures and concerts by Phill Niblock at Dartmouth College, Hanover NH, with Carlos Casas and Neil Leonard + students from Berklee College of Music, Boston

March 25 – 30 – University of Maine, campuses at Orono and Farmington, a series of lectures and concerts, with Katherine Liberovskaya, Alan Margolis, Neil Leonard, produced by Gustavo Aguilar

In 2013 minimalist composer Phill Niblock celebrates his 80th year with a massive retrospective at the Lausanne Contemporary Art Centre and a few select dates across Europe with saxophonist and electronic musician Thomas Ankersmit including this concert at Café Oto where the pair will present a selection of new works alongside ‘Sweet Potato’ for Basset Horn/Bass Clarinet/Eb Clarinet – a piece that was written for American clarinetist and sound artist Carol Robinson in 2001 and featured on the ‘Touch Food’ set of recordings (reissued by Touch in 2013). This evening’s concert will be performed with live contribution from David Ryan on bass clarinet.

We’ll play FIVE MORE STRING QUARTETS (by Phill Niblock) on the opening concert of the BIENNALE in VENEZIA. My quartet is called QUARTETTO PROMETEO and is this year’s winner of the Silver Lion in the Biennale. Another concert will be on the 6th of OCT 2012, and it will be played again, then. Francesco Dillon, francescodillon@gmail.com

Feb 16 at Brunel University, Music Department, London, with Bob Gilmore – A seminar at 6 followed by the concert at 7.30, with a student orchestra playing PN orchestra pieces